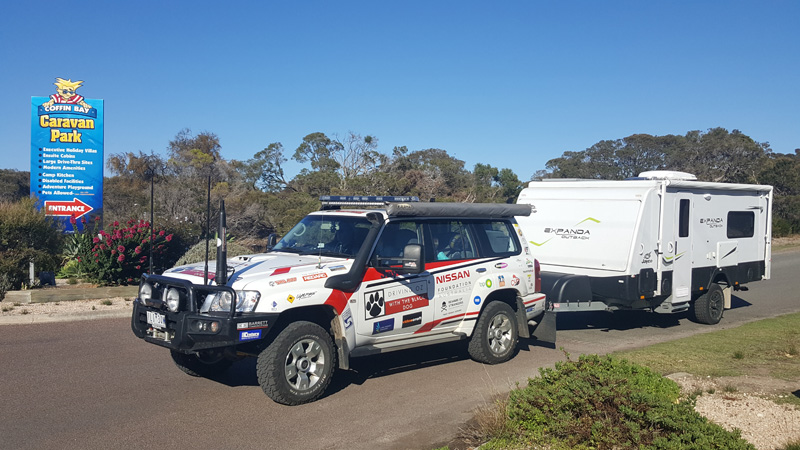 After leaving Warrnambool and still experiencing some adverse weather conditions, we pulled up for the night in an overnight rest area at Coomandook in South Australia. It was fabulous to park, stay hitched to the Jayco, just level up and step inside for the night. Things to consider – no 240V AC power, so the fridge was running on 12V DC or gas. No heater/ac, no microwave, no kettle or toaster. Were we worried? Nope! We still had the gas cook top and grill, lights, and the TV, which runs on AC or DC power. Easy peasy! Tea was cooked on the grill, it was a mild rainy night so we didn’t need the climate control, and even though the silos we parked next to blocked the tv signal, we were able to plug in our external hard drive and watch a family Disney movie! Spring rolls and Chitty Chitty Bang Bang .. it was a wonderful evening free camping for the first time in the Jayco. What about the battery if we were running the lights and the TV? Amazingly, though Paul kept getting the kids to read the battery charge level on the wall in the kitchen, we used 0.1V over the whole evening. Yep, you read that right, one tenth of a Volt. Virtually zero battery draw on the Jayco overnight.

It took less than 30 minutes to pack up in the morning, and a lot of that was because we didn’t want to get out of bed! Knowing we were going to be driving the Adelaide Hills in poor weather wasn’t motivation to get on the road. If you’ve driven the Hills you’ll know there’s a lot of inclines, some steep, some slow, but then there’s always the descent. When you are TOWING, it’s a whole different story. We were driving through misty rain, which settled in like fog in some sections, and Kirstine was glad that Paul was driving. The Legend has an automatic transmission, but there are still gears you can use to ease the pressure on the vehicle brakes as you descend the Hills. Most drivers cruise down with their foot on the brake, which means they are running the risk of overheating them. When this happens, they can fail. There are safety ramps in case this happens. We didn’t have this problem, as Paul drove the Legend down in 2nd gear, the REDARC Tow Pro Elite electric brake system helping guide the Jayco down.

Adelaide, Port Augusta and finally down to Whyalla. Paul & Kirstine were exhausted on arrival in Whyalla. Welcomed so warmly, and shown to our site by Deb, who jogged (!) with her rake, to where we needed to park, we were told that if we wanted to stay longer to just let them know, as Whyalla has so much to offer.

Over the course of the evening we decided that a day in Whyalla would be a good way to recover after a couple of long days of driving.

Using Deb’s advice and TripAdvisor, we set an itinerary for the next day. At the Marina we were lucky enough to meet the resident pod of dolphins. Following in the boats that returned from sea, it is hard to find the words to describe the experience of meeting these beautiful marine mammals in such close proximity. They lingered right by the propellers of the boats and seemed intrigued by the humans lined up on the pontoons next to this. The two females swam with their calves and turned their heads to raise an eye above the water to watch us. Those eyes are incredibly soulful and proof of their sentient nature. The kids held their hands in the water and were able to make fleeting contact with these spectacular animals. For all the human interest in them, these dolphins epitomise marine intelligence, and observed us with the same level of curiosity. Luna wanted to get in and swim with them, fascinated as she was to see these big animals in the water!

Our next stop was the Visitor Centre and Maritime Museum. Cooper had spotted a Geocaching symbol, and we spent a few minutes find our very first geocache as a family! It really is like treasure hunting, and we’re sure it won’t be the last.

The tour of the former HMAS Whyalla is an absolute must, and we are so glad we followed the advice of our hosts at the Whyalla Caravan Park. Teresa is the embodiment of knowledge about the Whyalla, who for a time became the SS RIP after being decommissioned. Focussed on the safety of the visitors on board. We learned so much about the role of Minesweepers in World War II, and how difficult the living conditions on board must have been. Without giving too much away, the sea sickness and cramped quarters for non-commissioned sailors, were a challenge that didn’t distract them from their vital role in locating and neutralising enemy mines.

Teresa was very interested in our trip, and Luna has the great honour of being the first Assistance Dog on board the Whyalla. A guide dog once joined the tour, but the steep steps which necessitated a backwards descent for the handler, became too much for them and the canine. Though Paul helped Luna with some aspects, she was ready for every stair challenge that arose as part of the tour.

Taking a photo or two of us on her phone for media purposes, Teresa told us about a new local initiative, INATT (I’m Not Afraid To Talk), which is a support group for young men started by the local football team. Hand in hand with the Whyalla Suicide Prevention Network, this is another avenue for local men to find support in a safe environment. According to the newspaper article published in the Whyalla News on Thursday 12 April, the Founding Member of the group, Jeremy Edwards said that the “group aimed to break the stereotype that males don’t need emotional support .. we want to get rid of the stigma that you’re weak if you need help. We want to get more men talking about this kind of thing”.

We were so happy to hear that Whyalla is taking positive steps towards supporting their community! This was our first stop on the Eyre Peninsula, and it has been incredibly welcoming and surprising. We’re so happy that we took 24 hours to stop and see a few things that Whyalla has to offer, particularly when it means finding out that mental health and suicide prevention is very much on the local radar, with residents taking positive steps to guide the future of Whyalla.